Drama And Lies: My Experience With Michael Somerville (+ ResultsFuel.com Warning)

I am completely sick of dealing with Michael Somerville.  I announced on my blog in April 2015 that we were no longer in partnership together.  He locked me out of the sites we built as a partnership and left owing me and the GoFunnels affiliates a lot of money.

I’m not going to get into all the details.  But I made this post for one reason.

Michael Somerville posted a video on June 23rd, making the completely false accusation that I took money from GoFunnels and that was the reason the affiliates have not been paid.

UPDATE: Michael Somerville has removed this video for obvious reasons – because it shows him badly lying in a way that should be clear to everybody who watched it.  I do have a copy on my computer as a backup.

You will notice if you have seen the video (and if he has not removed it) that his demeanor changes when he says this around the 1:48 mark:

“So if your commissions are owed…so here’s the deal.  When Andrew left, he left with the money (laughs). The money went that way.”

If you have studied NLP, you will pick up on his body language as a STRONG sign the subject is lying.

But here is the TRUTH.  After pressing him for months on the missing money (which is why he locked me out of all our co-created products) he finally says he updated the spreadsheet.

In an audio clip below, from a voicemail message Michael Somerville left on our answering machine, he finally admits responsibility for not paying the GoFunnels Affiliates as well as admitting to taking from the company $16K and me $2400.

I find it disgusting that he, plain-as-day, can lie and deceive my customers, telling people it was me that took the money when he was the one who took it.  Listen to the audio again.

I have run affiliate programs since 2004 and have NEVER not paid my affiliates.  Even when I personally, got hit with thousands of dollars in fraud.

Speaking of customers, this is how Michael Somerville thinks of our customers and my reputation: 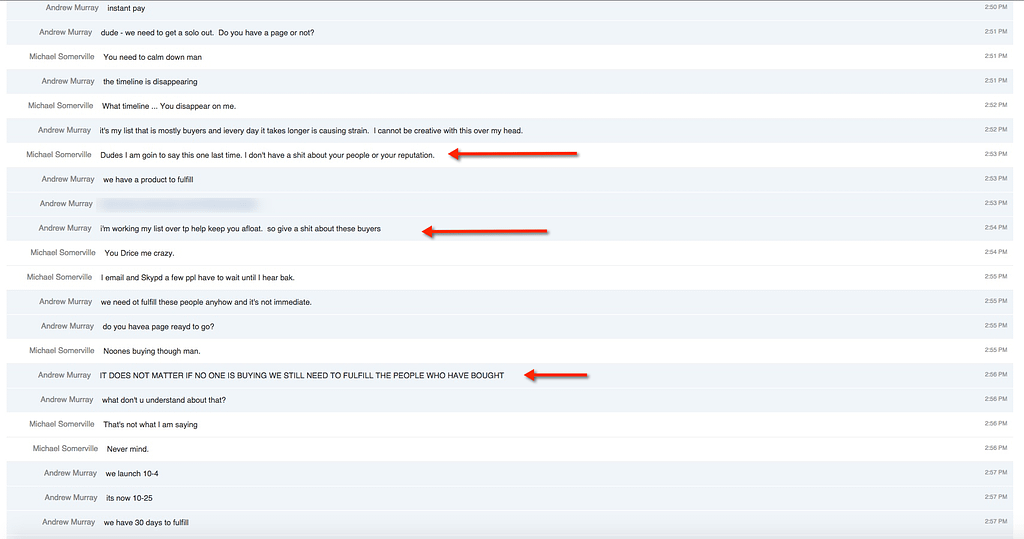 It was unbelievably frustrating working with Michael over the last couple years.  I could go into a lot more detail, but I want to move on.  I don’t need any negative drama in my life. Choosing to partner with Michael Somerville was a horrible mistake for me and my business.  I firmly, firmly regret it.  It was a terrible mistake, and I just have to swallow the loss and move on.

Yesterday I posted about how it appears that Michael Somerville was sending emails to my customer lists pretending to be me (well after the partnership had collapsed.)  He accused me of “attacking” him when I am giving him a fair opportunity to clear his name – despite the overwhelming evidence against him – and he has chosen to evade the direct questions and not to do so – even though he has the ability to locate who sent the email (if indeed it was not him.)

I walked away quietly, I tried repeatedly to part amicably.  Then I find Michael apparently sending emails pretending to come from me, telling people lies about me through his helpdesk (yes, it’s coming out) and lying behind my back to further his own agenda.

Seriously, Michael.  You need to go about your business without mentioning me!  And while we’re at it, it’s been over 60 days, take my content and name off all the products you locked me out of.  You should be able to make money with those products and sites I helped build without mentioning me at all.  Stop leveraging off me.

So this isn’t about me attacking you.  I have to clear my name.  You brazenly accused me of taking the money out of the partnership that you took out and spent.  Not me.  What kind of person can seriously lie to his own customers like that?

I’m not going to sit back while you tell blatant lies about me.

I don’t want anything to do with you, Michael Somerville.  You are the one who initiated these lies and deceptions.

I hope to never have to mention your name again.  I’d advise you to stop mentioning me, and using a fake story about me to launch your business.  Move on before you get yourself in a position you won’t want to be in.

UPDATE: Michael Somerville has had a Ripoff Report written about him and his product, Hidden Leverage.  If you search for “Michael Somerville Hidden Leverage Review” you’ll see it in Google.  As odd as his interaction is with that customer, I can confirm that that is exactly how he talked to customers when we were partners.  It drove me nuts the way he talked to customers in the helpdesk.

This is the same Michael Somerville who ran for public office in 2014.

I want to make it clear that I am not involved in business with him at all.  Michael Somerville still owes me many tens of thousands of dollars.

Update: Michael Somerville is running his latest scam called ResultsFuel.com – offering done-for-you subscribers and email lists.  I can tell you to be very wary of buying ResultsFuel.  At KlickBoost, he did the same thing and uploaded old stolen email lists and passed them off as new subscribers.

As T. Harv Eker says, “How you do anything is how you do everything.”  Buyer beware.  Consider yourself warned.

Warning: Do not buy ResultsFuel.  If you are looking for a ResultsFuel Review, you won’t find any solid ones as he has no real customers.  Testimonials are fake.  Buyer beware if you do proceed in any business dealing with Michael Somerville or ResultsFuel AKA Hidden Leverage.

UPDATE: This program has been renamed EarnAve.com or Earn Avenue.  If you are researching EarnAve or looking for an EarnAve review, this is the same program.  Hopefully, you can see a pattern of re-branding the same crappy program once it starts to get some bad publicity.

I become aware of EarnAve, because Michael Somerville, the program owner for EarnAve keeps re-importing  emails along with those of customers from YEARS ago in the hopes of duping some of them into buying the same thing under a different brand.  If this is how he promotes his own over-hyped programs, how do you think he actually delivers the leads in his programs?

If you guessed by importing old email addresses, you guessed correctly.  Warning.  Stay away from Earn Avenue.