The Wealth Vault is a private investor-based membership that has been operating for several years.  Actually, The Wealth Vault grew out of the influential Passive Income Newsletter, which was also produced by Brad Weinman and Barry Goss.

I should mention that I have known Brad for years, and we speak on the phone periodically.  So I know and trust him.

Brad is an internet marketing compatriot, but has been obsessed with finding passive income solutions.  And he's compiled and tested several hundred different opportunities with his own money.  The cool thing about The Wealth Vault is that he'll tell you what works, what his specific results are, and even break all the investment opportunities down to low-risk, medium risk and aggressive.

What's Inside The Wealth Vault?

The course component of the Wealth Vault is 2 sections.

There is the mailbag section, where you can write Brad a question, and he will answer it in the membership area.  This is a very powerful option, because most people who are involved in the investment world don't let you ask them anything.

the second part is the portfolio section, which is a group of investment opportunities broken down into a traditional investment portfolio and an unconventional portfolio. 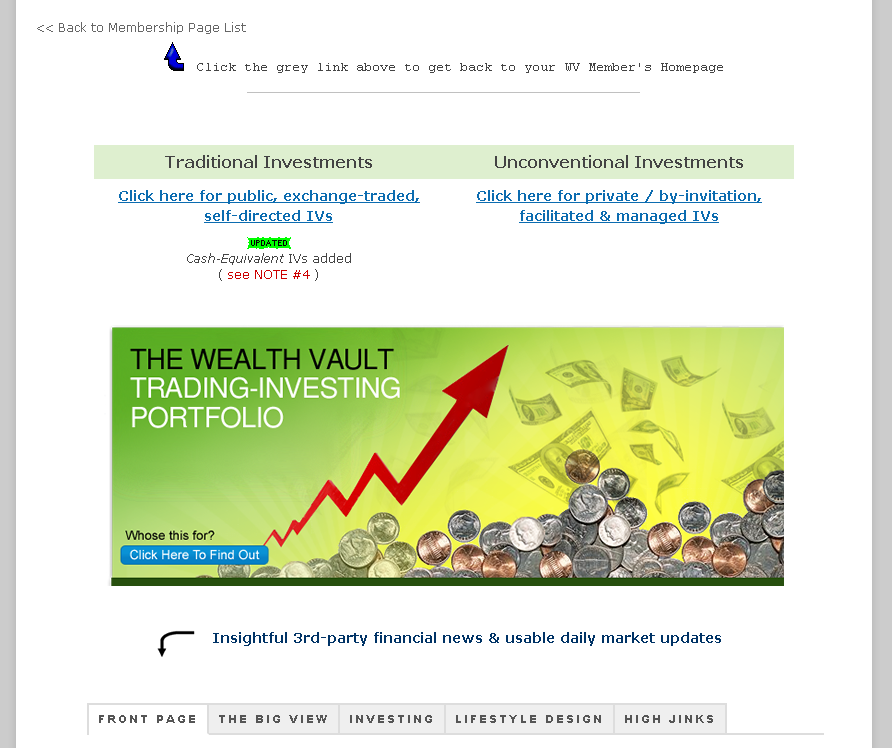 Back Office screenshot from The Wealth Vault

The unifying strand of the membership is the fact that all the investments shared by Brad Weinman and Barry Goss are passive income solutions that don't require a large investment of time or energy to turn into more income.  Everything is vetted either personally with their own money, or by close friends.

Who Should Consider Joining Brad Weinman in The Wealth Vault?

The truth is, there are much better investment opportunities OUTSIDE the box than inside.  And Brad Wajnman is the go-to guy to see what works, and what's a scam.

Personally I've been a member of The Wealth Vault for over a year.  I love it.  It's better than a typical investment newsletter because it covers so many more investment options that go well beyond the stock market.  And I've found some awesome opportunities to grow my money COMPLETELY PASSIVELY.

So the cool thing is that it puts you directly in Robert Kiyosaki's “I” quadrant.

Bonuses For Joining The Wealth Vault

Now there is a paid membership.  If you decide to become a member of Brad Wajnman and Barry Goss's Wealth Vault, just let me know and I'll ship you my exclusive DVD: The Wealthy Habits” which explores how the wealthy think differently, and what core traits make them more successful in investing and business.   yes, it's a physical DVD that will go to your house!

Also, I'll give a copy of the incendiary documentary MeltUp, which explains about inflation, and how best to protect yourself (and profit) from the dramatic changes that inflation is going to have on our economy.

And finally, I'll give you a copy of my private webinar “What Nobody Told You About Money” where I explain…well…What nobody else told you about money.  You'll also get my private wealth  mindmap.

Check out what you'll learn inside The Wealth Vault.